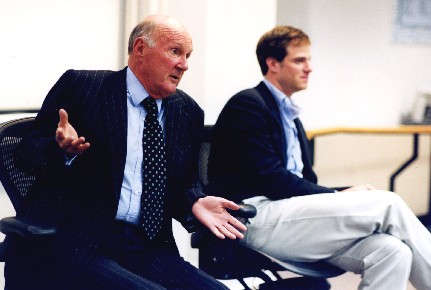 Julian Robertson was not a trend follower. He was however a macro trader that often rode the very same worldwide trends as other trend followers. We would argue against his use of fundamentals, which may have led to his early retirement.

Robertson was a primary force in creating and building the hedge fund industry, beginning with the founding of Tiger Management in 1980. With mixed feelings, he watched his Tiger cubs go on to start their own successful funds or other enterprises.

Lee S. Ainslie III Robertson can take pride, however, not only in the accomplishments of those he mentored but also in the continued mentoring of young people by those he trained. Bills and Griffin were once Tiger cubs. Now they are successfully mentoring another generation… Fortune:

So I’m traveling to Charlottesville, Va., with hedge fund legend Julian Robertson and a couple of the other superheroes in the business, all on Air Tiger, Robertson’s Gulfstream II (it’s easy to spot at LaGuardia, by the way–his is the only one with black and orange stripes painted on the tail). The occasion: the dedication of a room in Robertson’s name at U.Va.’s McIntire School of Commerce, along with a forum on hedge funds. On the Gulfstream are John Griffin (who runs Blue Ridge Capital and was once Julian’s right-hand man at Tiger Management) and a handful of other young Wall Street hotshots–such as econ whiz Leah Modigliani of Morgan Stanley–as well as Robertson and his wife, Josie. (At one point I wonder whether Mr. and Mrs. Robertson have ever been referred to as Josie and the Pussycat.)

You probably remember that Robertson, 68, very publicly returned his investors’ money back in March. After a couple of years of under-performance, his funds, which had once held some $21 billion, had shrunk to less than $7 billion. Robertson called the mania over Internet stocks an inadvertent Ponzi scheme, saying to me, The irony of my situation is that I’m leaving just when my game is coming back in style (see Street Life in the fortune.com archive). You called it, Julian! As of Dec. 8, the Nasdaq is down 29.3% for the year, while Robertson, who still runs many millions of his own money, is up modestly, mostly on the strength of his holdings in US Airways.

Robertson is a North Carolinian and a faithful graduate of Chapel Hill. So why is he collecting honors at the university one state to the north? Turns out John Griffin–one of Robertson’s early hires at Tiger–is a U.Va. alum, and he brought in bunches of Virginia grads, some of whom went on to form their own hedge funds, including Lee S. Ainslie III, who now runs the $6 billion Maverick Capital. (Some say Robertson would have been wise to groom one of these so-called Tiger cubs as his successor.) Last year Griffin organized an effort to honor their mentor by raising close to $1 million to construct a state-of-the-art trading room at McIntire, the university’s undergrad business school.

In what seems like minutes, we land in Wahoo-land. Griffin takes us for a quick tour of the fabulous (Robertson’s pet superlative) countryside, passing by the homes–estates!–of Edgar Bronfman of Seagram and Halsey Minor, founder of CNET. (John Kluge’s place is on the other side of town.) After that it’s on to the campus for a quick tour of Mr. Jefferson’s university, which is pretty dang interesting. Before we know it, we’re popping over to McIntire to dedicate the Julian H. Robertson Jr. Capital Markets Room, which resembles a miniature version of Salomon’s trading floor, replete with high-end flat-screen monitors, tickers, and such. In his brief remarks, Robertson thanks his proteges and the school, then gives his assessment of the current market: Will the excesses of speculation on high-multiple stocks and mania investing result in a total collapse of all equities? Or will mania and speculation continue to fuel the high multiples? I think the answer to both questions is a resounding no….I see some sort of equilibrium being reached, with the ultra-high-multiple and mania companies coming down in valuation and the other growth stocks, even some of the well-managed old-economy stocks, appreciating. This is a soft-landing theory–probably the best scenario we can hope for. Amen, brother!

The next morning is a hedge fund symposium, again the brainchild of Griffin. The first panel is made up of Robertson, Griffin, Ainslie, and another U.Va. grad, Paul Tudor Jones II, who runs Tudor Investment Corp., one of the largest hedge funds in the world. The press-shy Tudor Jones, who as a globally minded macro investor will go after almost any investment opportunity, spoke pointedly and unequivocally. If there was one sector in the world I could short, it would be the private-equity business in the U.S., he said. (You can, added another panelist. They’re called CMGI and ICG.)

Then all the hedgies were asked for their best investment idea. I would go long on Target, which has better same-store sales and better fashion sense than Wal-Mart, yet is selling at half the valuation, said Ainslie. Kmart, despite what you see on TV, is slowly but surely going out of business. Jones: I would buy two-year notes. I think Nasdaq will go to 2000 [it was 3032 at that point], and the Fed will cut interest rates. As for Griffin: Run, don’t walk, from over-leveraged telcos. Someone thought that if they built a network, they would come. Well, now they have a $10 billion network, and there’s a bandwidth glut.

Finally, Robertson: I like Samsung at four times earnings, he said. It is the world’s lowest-cost producer of liquid-crystal display, the second-largest producer of DRAM chips, and the fastest-growing major maker of cell phones in the world. One final prediction from the master: Hedge funds will have their best relative performance in years, he said. Which makes you think–if Robertson had stayed the course this year instead of folding in March, Tiger would still be on the prowl. 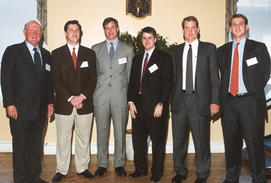