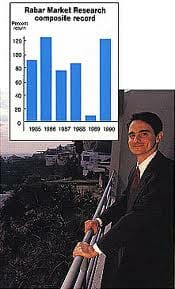 Excerpts taken from The Complete TurtleTrader by Michael Covel:

Paul Rabar, another student candidate, just happened to have been the most experienced trader of all student hires. Rabar had dropped out of UCLA Medical School. Before that, he was a classically trained pianist. However, before being hired by Richard Dennis, he was trained and mentored by Chuck Le Beau. In the late 1970s and early 1980s, Le Beau was a regional director for the E. F. Hutton & Co. brokerage on the West Coast. It was there that he taught Rabar. In one of those small-world stories, their E. F. Hutton office ended up handling some brokerage for the infamous Billionaire Boys Club (BBC) during the early 1980s. The BBC was started by Joe Gamsky (who later renamed himself Joe Hunt, and became the focus of several TV movies).

Gamsky was trading serious-sized money across the Chicago Mercantile Exchange from 1980 to 1984, making a big name for himself. Before he was exposed as a con, Gamsky was getting Dennis- like attention on the Chicago trading floors and in the press. He, too, was called a boy wonder. Le Beau and Rabar, however, did nothing wrong. They were simply brokers placing trades for an assortment of clients. Still, was it possible that Dennis was interested in going through the interview process with Rabar just to see what he may or may not have known about Gamsky’s trading?

That’s the kind of opposition research of which Dennis was certainly capable. Rabar’s interview did evolve into a discussion of the finer points of trading. At one point Dennis asked a trick question: “What if you get bounced out of the same ‘long’ trade five times in a row?” Rabar was cocksure: “If it goes up again, I will buy it again.” Rabar’s knowledge had a lot to do with his hiring, but he was the exception. Dennis didn’t want a room full of Rabars.

Rabar after Richard Dennis and the Turtles:

Most Turtles, however, were essentially one-man road shows. For example, when Paul Rabar first started out, people who wanted to invest with him would ask how he traded. Rabar said that if they wanted to invest, they could give him their money. Period. No questions asked. Potential investors would have to meet him at the airport. Some investors probably walked away from what could be perceived as his arrogance, but without a doubt, many were smitten by Rabar’s “take it or leave it” attitude. There is a fine line between confidence and arrogance, and Rabar walked it with great success.

It is well known that over a period of several years, Richard Dennis traded an initial stake of $1,200 into $300,000,000. By at least some measures, he thereby achieved the greatest performance in the history of the markets. To do so, his methods must have been different from or contrary to those of other traders in some important respects. The concept of contrarianism is perhaps the most important of those imparted by Dennis. Because each futures market is a zero-sum game, even a marginally profitable trader must extract capital from other market participants and, therefore, must use methods that are different from those of other market participants. Contrarianism in one form or another, whether or not a trader consciously identifies it as such, is the first requisite for profitability. Rabar Market Research, Inc. uses long-term trend following. Technical indicators are analyzed by computers that generate trading instructions or orders. Though most of these orders are followed strictly without any interpretation, some are modified by Paul Rabar, the company’s president. Rabar’s risk management limits exposure in each trade, each market, each sector, and each account. Risk is also controlled with extensive diversification of markets traded. Paul Rabar, CEO and sole principal of Rabar Market Research, Inc., was trained in the mid-1980s by Richard Dennis, one of the most successful futures speculators of all time.