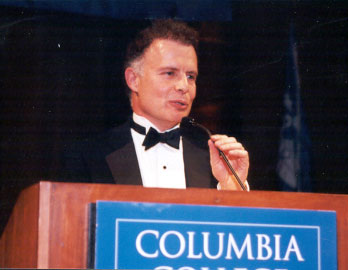 A veteran of three decades of bull and bear markets, Kingdon oversees a $3-billion company that invests in a global array of stocks, bonds, currencies, and options. So he isn’t exactly the type to overreact to wide swings in the market. Besides, as any hedge-fund manager knows, where there’s adversity, there’s opportunity. I knew I wanted to get into this business from the time I was thirteen, when I was given a couple of shares of stock, says the quietly intense Kingdon. Even though the market nose-dived soon thereafter, I was taken with the idea that you could buy something that made money and then go out and do something else during the day. That seemed like a wonderful way to make a living. By high school, the Brooklyn-born Kingdon was already authoring an investment newsletter. After attending Columbia College in New York City and then HBS, Kingdon decided to take his first job at AT&T, reasoning that by working in the firm’s pension fund administration group he would get to know many different kinds of investment outfits.

In 1975, he joined one of these companies, New York based Century Capital Associates, where he remained for eight years. Kingdon believes in having a life outside work, as well. He and his wife are devoted to their two children, and Kingdon, a third-degree black belt, attends tae kwan do classes three times a week a few blocks from his firm. No matter how tough the markets are, he laughs, when you are out there practicing martial arts against a guy who is twenty years younger and is aiming for your head, you tend not to worry about your stocks. Back in the office, however, Kingdon’s attention is fully on his business, as evidenced by the firm’s 32 percent plus gross average annual return since 1983–which translates to an impressive 26 percent in investors’ pockets after fees are deducted. Still, Kingdon remains modest about his success. It’s important not to confuse investment genius with a bull market, he says with a smile.”