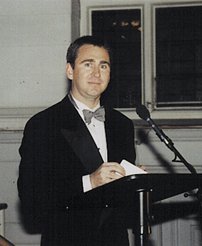 Kenneth Griffin (President, Citadel Investment Group, Chicago) is one of the most successful and secretive traders in the world. How did he get started? Ted Fishman from Worth Magazine explains:

During his freshman year at Harvard…in 1986…he traded stock options out of his dorm room. In his sophomore year…Griffin launched a convertible-bond arbitrage fund. That year, the 1987 stock-market crash hit, and Griffin struck it rich. When he returned for his senior year, he had $1 million in investors’ money for the same strategy. I spent most of my time at Harvard trading, he says.

How does Griffin stay ahead? What is his business model today?

Griffin’s greatest talent is not in analyzing the market per se…His primary role is as an evaluator of the models his brain trust brings him…Some focus on trades that will be held only a matter of minutes and others on trades that will stay on the books for up to a year and a half. The inconsistencies wash [out] in the end. [His] Kensington Global Strategies took top honors at the Alternative Investment Awards (sort of the Oscars for the hedge-fund world) for scoring the highest risk-adjusted returns [making Citadel] arguably the best hedge fund in the world.

This Citadel aspires not to turn boys into men, but to turn cash into, well, more cash. Citadel Investment Group, started in super-trader Ken Griffin’s Harvard dorm room in 1987, has become one of the world’s largest hedge funds, accounting for approximately one percent of all trading activity in New York, London, and Tokyo every day. Based in Chicago, Citadel currently manages more than $6 billion for a wide range of investors. Characterized by its creator’s rigorous application of quantitative trading methods and technology, the firm currently employs 15 separate strategies. Citadel has enjoyed outstanding returns the past 10 years, but will face new problems as the firm tries to cope with its mercurial growth.