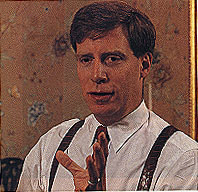 I had enrolled in graduate school to study for an economics degree. However, I found the program overly quantitative and theoretical, with little emphasis on real-life applications. I was very disappointed and dropped out in the second semester. I took a job as a management trainee at the Pittsburgh National Bank, with the idea that the program would provide me with a broad overview that would help me to decide an area of focus. I had been at the bank for several months when I received a call from the manager in the trust department. I hear you attended the University of Michigan, he said. When I confirmed his statement, he said, Great. He asked whether I had an M.B.A. I told him that I did not. He said, That’s even better. Come on up; you’re hired.

Druckenmiller in the book “Inside the House of Money”:

Stan may be the greatest moneymaking machine in history. He has Jim Roger’s analytical ability, George Soros’s trading ability, and the stomach of a riverboat gambler when it comes to placing his bets. His lack of volatility is unbelievable. I think he’s had something like five down quarters in 25 years and never a down year. The Quantum record from 1989 to 2000 is really his. The assets grew from $1 billion to $20 billion over that time and the performance never suffered. Soros’s record was made on a smaller amount of money at a time when there were fewer hedge funds to compete against. What is most interesting to me about the breaking of the pound was the combination of Stan Druckenmiller’s gamesmanship – Stan really understand risk and reward – and George’s ability to size trades. Make no mistake about it, shorting the pound was Stan Druckenmiller’s idea. Soros contribution was pushing him to take a gigantic position.

The first thing I heard when I got in the business, not from my mentor, was bulls make money, bears make money, and pigs get slaughtered. I’m here to tell you I was a pig. And I strongly believe the only way to make long-term returns in our business that are superior is by being a pig. I think diversification and all the stuff they’re teaching at business school today is probably the most misguided concept everywhere. And if you look at all the great investors that are as different as Warren Buffett, Carl Icahn, Ken Langone, they tend to be very, very concentrated bets. They see something, they bet it, and they bet the ranch on it. And that’s kind of the way my philosophy evolved, which was if you see – only maybe one or two times a year do you see something that really, really excites you… The mistake I’d say 98% of money managers and individuals make is they feel like they got to be playing in a bunch of stuff. And if you really see it, put all your eggs in one basket and then watch the basket very carefully.