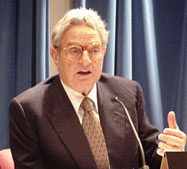 Ted Koppel: …as you describe it, it [the market] is, of course, a game in which there are real consequences. When you bet and you win, that’s good for you, it’s bad for those against whom you have bet. There are always losers in this kind of a game.

Soros: No. See, it’s not a zero-sum game. It’s very important to realize…

Ted Koppel: Well, it’s not zero – sum in terms of investors. But, for example, when you bet against the British pound, that was not good for the British economy.

Ted Koppel: Because – I mean put it in easily understandable terms. I mean if you could have profited by destroying Malaysia’s currency, would you have shrunk from that?

Soros: Not necessarily because that would have been an unintended consequence of my action. And it’s not my job as a participant to calculate the consequences. This is what a market is. That’s the nature of a market. So I’m a participant in the market.

TurtleTrader comment: Why would Soros say trading and speculating are not zero-sum games? Soros is to be saluted for his tremendous success, but he is indeed a speculator participating in a zero-sum game. Perhaps he is reluctant to be as brutally honest with Koppel’s audience as he is with himself. Trading is a zero-sum game when measured relative to underlying fundamental values. No trader can profit without another trader losing.