“Trading numbers” was just another Dennis convention to reinforce abstracting the world in order not to get emotionally distracted. Dennis made the Turtles understand price analysis. He did this because at first he “thought that intelligence was reality and price the appearance, but after a while I saw that price is the reality and intelligence is the appearance.” 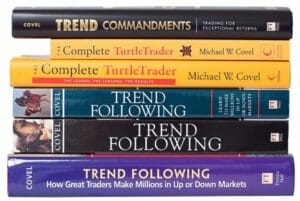 He was not being purposefully oblique. Dennis’s working assumption was that soybean prices reflected soybean news faster than people could get and digest the news. Since his early twenties, he had known that looking at the news for decision-making cues was the wrong thing to do.

If acting on news, stock tips, and economic reports were the real key to trading success, then everyone would be rich. Dennis was blunt: “Abstractions like crop size, unemployment, and inflation are mere metaphysics to the trader. They don’t help you predict prices, and they may not even explain past market action.”

The greatest trader in Chicago had been trading five years before he ever saw a soybean. He poked fun at the notion that if “something” was happening in the weather, his trading would somehow change: “If it’s raining on those soybeans, all that means to me is I should bring an umbrella.”

That said, the most successful Turtle doesn’t sugar-coat his style of trading. He addresses the drawbacks head on. When he compares his philosophy to a form of government, he sounds like a down-to-earth Sunday school preacher:

Trend following is like a democracy. Sometimes it doesn’t look so good, but it’s better than anything else out there. Are we going to rely on buy and hold? Buy and hope, that’s what I call it. Are we going to double up when we lose money? The world is too big to analyze. The fundamentals are too large. We need to aggressively, unrepentantly sell trend following and describe it as it is: a system of risk controls that gets in the right markets at the right times and limits the disaster scenarios.

In Jerry Parker’s world, the unexpected eventually happens. If you think the world is tidy, get ready for the hurricane to blow you away. For example, if there’s a good side to the 2006 implosion of the Amaranth hedge fund (to the tune of $6 billion), it’s the embarrassment suffered by the state and city pension funds that invested in it. And in

Amaranth’s case, its name (a mythical flower that never fades) may have held a hidden meaning. The secondary meaning: a pigweed.