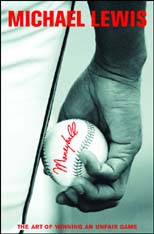 Thomas Boswell, “Evaluation By Numbers Is Beginning To Add Up”
The Washington Post: May 29, 2003

For nearly 25 years, there’s been a huge food fight in baseball. The argument was basic: How do you evaluate a player? On one side were general managers, scouts and managers. For the most part, they evaluated players the old-fashioned way — with their eyes, stopwatches and radar guns and by looking at statistics which were popularized in the 19th century. Their mind-set was always, “How fast does he run? How hard does he throw? What’s his batting average? Does he look like a major leaguer should look?” On the other side — led by statistical gurus such as Bill James and Pete Palmer, and assisted by countless lesser “seamheads” (including, at times, me) — were the geeks, the outsiders, mere fans, who thought they knew better. Many of us never thought this day would come. Now, with the best-selling success of Moneyball by Michael Lewis, sophisticated statistical analysis has finally become a publicly acknowledged part of baseball’s mainstream. As Lewis has chronicled, the methods used by the Oakland Athletics in recent years have succeeded so suddenly and so well that, after reading “Moneyball,” many an owner — especially poorer ones — will have to ask, “Why aren’t we doing it this way?” A few years ago, Oakland General Manager Billy Beane bought the whole New School stat-analysis worldview, inspired by James’s popular “Baseball Abstract” but expanded by many people over many years. Beane’s 100-win low-budget A’s have been constructed almost entirely on academic ideas that are heresy to traditionalists. In Beane’s world, the stats always rule…Just as important, Beane’s disciples or imitators are now in complete control of the Boston Red Sox (for whom James is a consultant and owned by John W. Henry) and the Toronto Blue Jays — the Red Sox lead the American League East and the Blue Jays are three games back. The virus has spread. The genie is out of the lamp. There’s no turning back now.

TurtleTrader comment: John W. Henry, now owner of the Boston Red Sox, is of course part of Lewis’ Moneyball. Trend followers will enjoy this book, as the parallels to trading are uncanny. Read it!

Billy Beane of the A’s