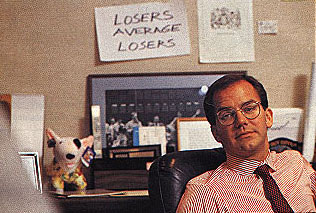 The photo in the background of Paul Tudor Jones’ office says it all: Losers average losers. Jones’ wisdom was obviously lost on James K. Glassman judging from the following excerpt from his Washington Post investing column:

If you had Enron in your portfolio and didn’t sell it at $90 or even at $10, don’t feel embarrassed. As Alfred Harrison, a money manager at Alliance Capital Management Holding LP, which owned a ton of Enron, put it, ‘On the surface it had always seemed to be a fairly good growth stock. We bought it all the way down.’

Glassman and Harrison are both dead wrong. You must feel less cash in your pocket if you average losers, not just embarrassed. Harrison violates a cardinal rule of trend following trading. Even worse, as an active money manager for clients, he admits to averaging losers as a strategy. If the trend is down, it’s not a buying opportunity. It’s a selling opportunity or a “time to go short” opportunity.

The absolute wisdom is on a simple piece of paper hanging right behind Paul Tudor Jones’ head: “Losers average losers”. Think about it.