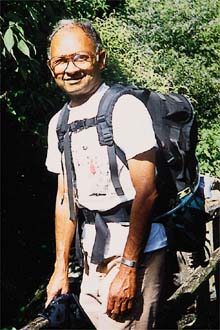 Dinesh Desai was one of the best trend followers in the 1980s before he retired. He made tons of money. He often averaged 80% a year and had some years where he was over a 100%. He was real good.

According to Managed Account Reports, the top three funds in 1987 in after-commission performance were:

[These days] Desai tries to concoct some sort of creative adventure every year. Past excursions have included travel to the world’s wettest spot, in India (2001); kayaking 110 miles around the Salton Sea (2000); hiking all 450 miles of the Bay Area Ridge Trail route (1999), and hiking 180 miles of Death Valley in July (1998)…Desai emigrated from the Indian city of Gujarat in 1960. Here is an excerpt from Managed Account Reports about Desai:

Desai, a long-term trend-follower, ran Mountain View, California-based Desai and Co, from 1973 until his retirement in 1994. At his peak, he had $ 250 million under management. Today, Desai focuses on different kinds of peaks: mountain peaks. He is now an avid mountain climber and outdoor adventurer. Among his achievements, 59-year-old Desai walked the 1,100 mile California coastline, from Oregon to Mexico. And last year, he and three others went on a 200-mile hike in Death Valley, during July, when temperatures hit global highs. He says he survived by drinking three gallons of water a day, and by carrying a reflective umbrella fashioned with an aluminum space blanket to deflect the radiated heat.

Why Dinesh Desai? Why not? He proves clearly hard work and belief in trend following can win big.