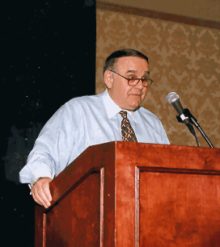 With all the market’s recent ups and downs, we thought we’d get the perspective of one of Wall Street’s biggest stars. Leon Cooperman is a founder and principal of Omega Advisors, an investment partnership managing $2 1/2 billion. And, previously–and this goes some years back–Leon headed investment research at Goldman Sachs. Good to see you. Thanks for coming in tonight. First off, tell us a little bit about today. From your perspective, as having managed money for quite a number of years now, does today represent a real turnaround in the market?

I think it’s much too early to tell. I think all we’ve learned is what we already knew, is that stocks have become like commodities, regrettably, and they go up to limit and they go down to limit. And we’ve also known over the years that when they go down, they go down faster than they go up.