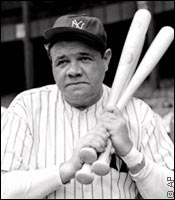 Winning percentage in your trading… does it really matter? Did you know that trend followers win 40% of the time on average?

George Herman Ruth, hero of New York, hero of baseball and arguably one of the greatest sports legends of all time, will always be known for his home runs. But he had another habit that isn’t talked about much: striking out a lot. In fact, with a lifetime batting average of .342, the Babe spent almost two thirds of his time trudging back to the dugout. From a pure numbers perspective, he saw more failure at the plate than success. But when he got a piece of one, well, it was enough to give any pitcher nightmares. There’s a reason why Ruthian is still a well known adjective in sports writing, conveying the awe and power of a grand slam in the bottom of the ninth.

Ruth fully understood that the hits help a whole lot more than the strikeouts hurt. He gave his philosophy in a nutshell:”Every strike brings me closer to the next home run.” And when reporters asked him how he dealt with the occasional slump, he replied: “I just keep goin’ up there and keep swingin’ at ’em.”

The lesson for traders is this: If you have realistic confidence in your method and yourself, then temporary setbacks don’t matter because you will come out ahead in the long run.

To further illustrate the point, consider a modern day example: The blue collar joe v. the entrepreneur. The blue collar joe is paid the same lump sum every two weeks like clockwork (with the occasional miniscule raise paced to keep up with inflation). In terms of winning percentage, blue collar is king: his ratio of hours worked to hours paid is one to one, a perfect 100%. He has a steady job and a steady life. Of course, the security he feels is something of an illusion – his paycheck comes at the whim of his local economy, his industry, and even the foreman of his plant. And the pay isn’t exactly impressive. It gives him a solid, livable life- but not much more.

In contrast, consider the entrepreneur. His paydays are wildly irregular. He frequently goes for months, sometimes years, without seeing tangible reward for his sweat and toil. His winning percentage is, in a word, pathetic. For every ten big ideas he has, seven of them wind up in the circular file. Of the remaining three, two of those fizzle out within a year – another big chunk of time, money and effort down the drain. But we can’t feel too sorry for the poor entrepreneur who spends so much time losing. He has a passion for life, he controls his own destiny and that last idea paid him off with an eight figure check.